Tea Time With The Locals at Gunung Lambak

It was one of those weekends when lazing around in Singapore didn’t seem quite right to us. So we took our car out for a spin to nowhere. Soon we found ourselves up on the roads of Kluang, at 5 am in the morning. After what could be said as one of the best Roti Chennai that we had ever tasted, it’s time for a good morning workout.

It struck us that one of the more prominent landmarks in Kluang is actually Gunung Lambak, or affectionally known to us as “Brother Lambak”. So we hopped into our trusty little car and drove all the way down to Lambak. It was 0530hrs when we had arrived at foot of Brother Lambak. Pity that we did not bring along our headlamps, if not we would be able to watch the sun rising over Lambak.

Along the way we were greeted by the resident primate leaping off trees and slipping down to the forest floor to forage amongst the cool morning dew. Some of the local visitors brought watermelons to share with these resident monkeys.

Leaving the scene of the morning foraging, we came to a logged path that bridges the lands between a tranquil stream. We cross the log bridge and trot upwards towards the undulating terrain that runs parallel along the stream. In due course, the stream were behind us and we soon found ourselves at the foot of a near vertical root laden steps of Gunung Lambak. We were grateful for the kind folks that laid the rope work on this steep climb. We pressed hard on our knees to make the climb up the beautifully thick undergrowth of saplings, ferns, monkey ladder, rattan vines and palm and bamboo shoots. 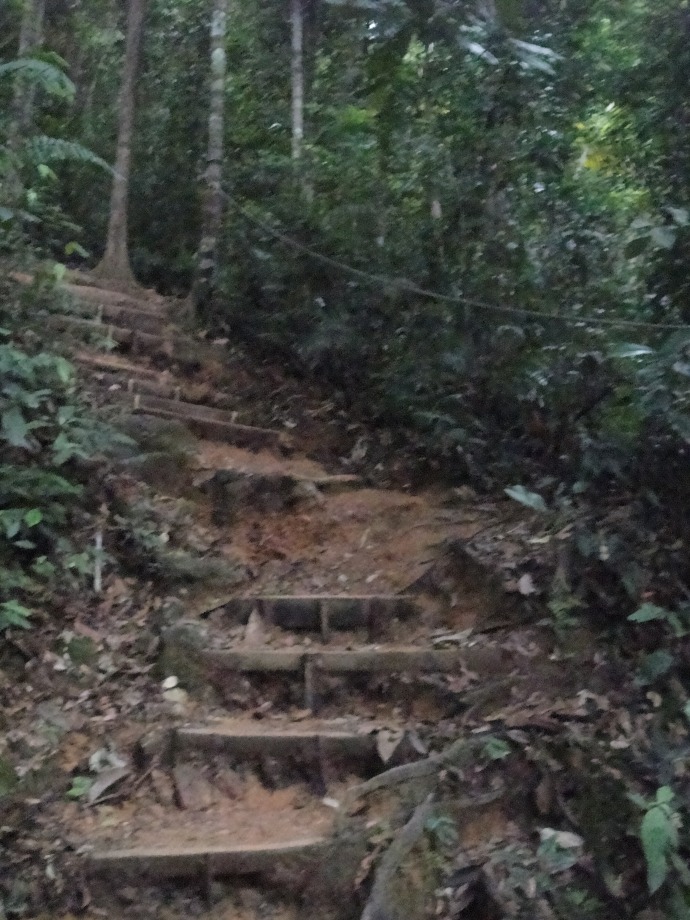 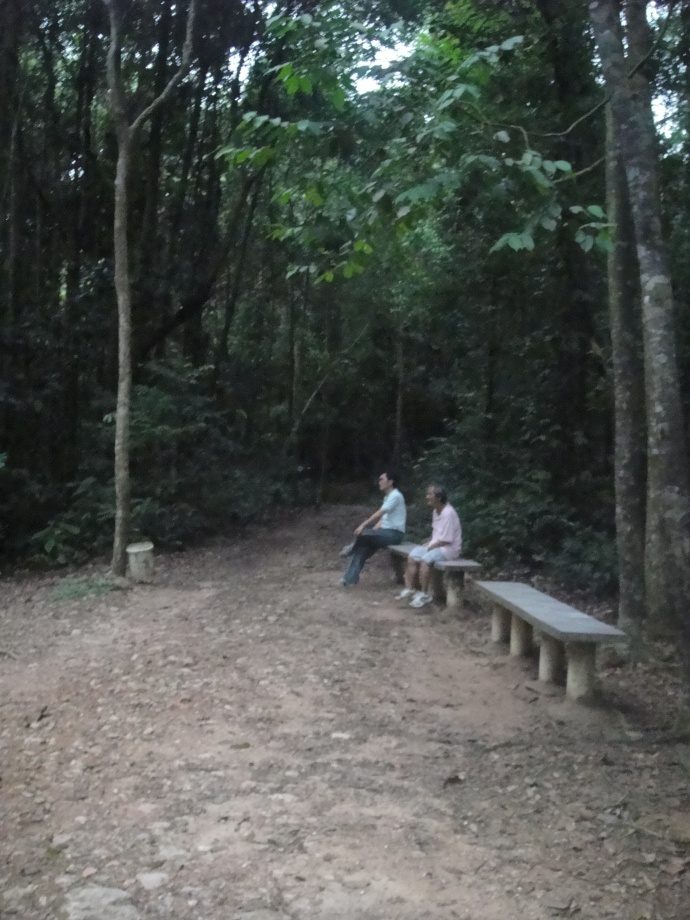 The steep slope soon evens out to a foot path towards a 3 way junction with a roughly made wooden bench sitting in the middle of the junction. To the left is the foot path leading downhill to a broken gate, to a clearing behind the resort at the foot of the hill, which the locals gather wild olives along this footpath. 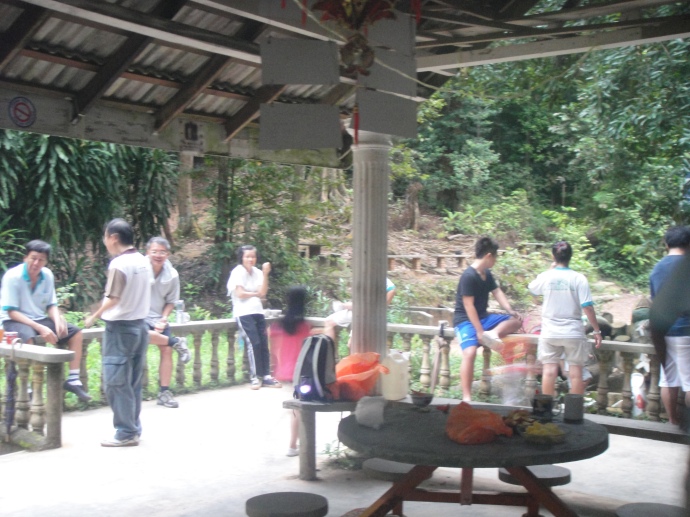 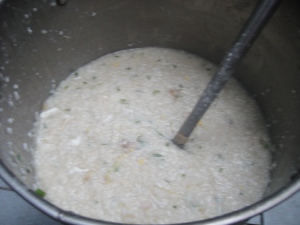 And about 1 km to the right leads to a pavilion whereby the locals gather for a morning brunch of black olive tea and porridge or noodles made over bonfire with wood gathered from the forest. 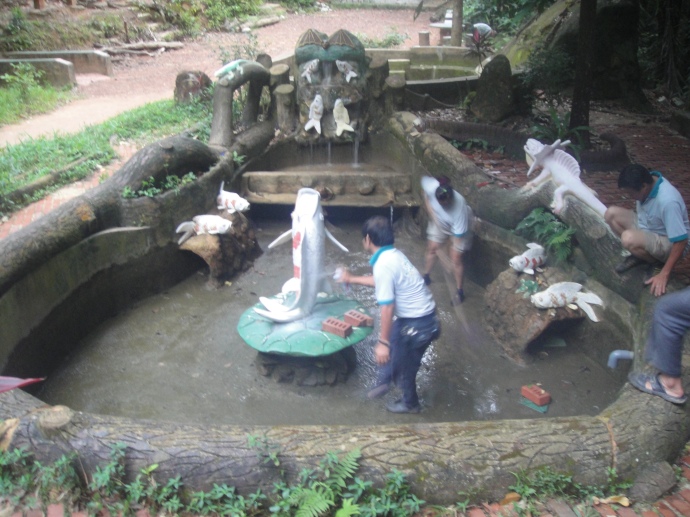 Each Sunday the locals gather at this pavilion to make merry and have their little catch up session for things that had happened over the week. What surprises us the most is that all the constructions around the pavilion were hand crafted by the locals. Every brick and every mortar were hulled from the foot of the hill by hand, up to where they stood today. Impressive determination and creativity if I may add. No wonder the locals cherished the place so much as though it was their own backyard…

We followed our noses to the smell of freshly brewed coffee… A natural yearning of all morning mountaineers. Ha ha… Of all the coffee that we have tasted, nothing beats the brew of olive mixed coffee boiled in natural spring water and fine forest deadfall… Heavenly is the taste! We stayed around for the next few hours feasting on the local vegetarian delicacies offered by the Lambak community. Such is the blissful morning on Brother Lambak! 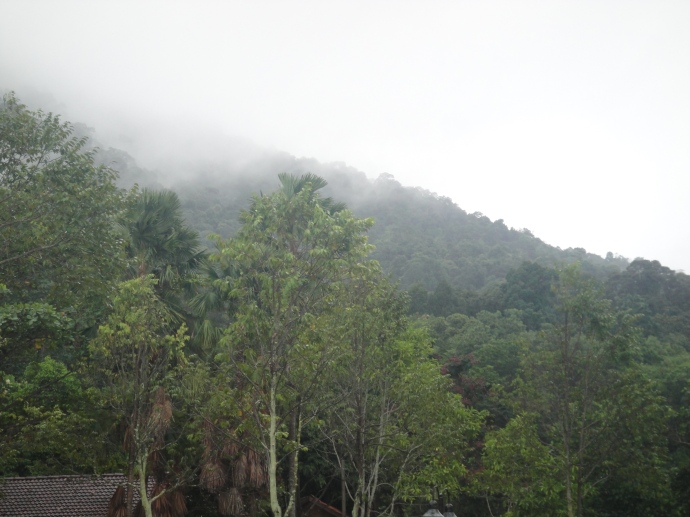 Check out the video of Gunung Lambak on a sunny sunday morning. This is community life that our city life, Singapore is lacking.

Go on Get Some Karma, Share with your friends

3 thoughts on “Tea Time With The Locals at Gunung Lambak”

Where we are going? 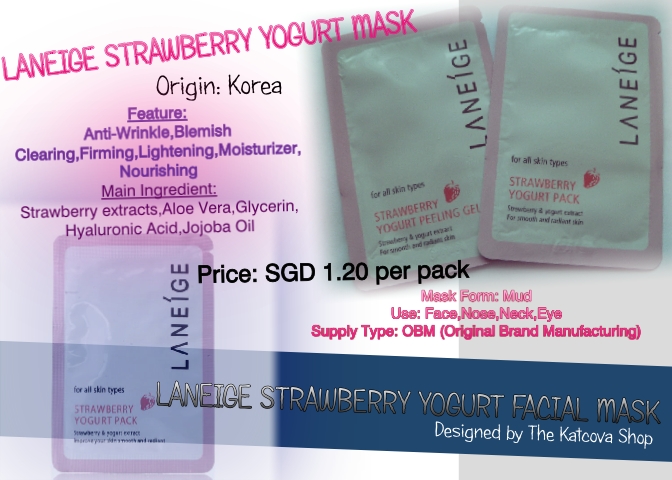 Getting Ready for your trips

Quotes of the Day

Live the Spirit of Adventure

“Hiking lets me have some time to myself.”

"In every walk with nature one receives far more than he seeks." John M

"The mountains are calling and I must go." John M

“Take only pictures; leave only footprints.”

“Because Life is Traveling.”